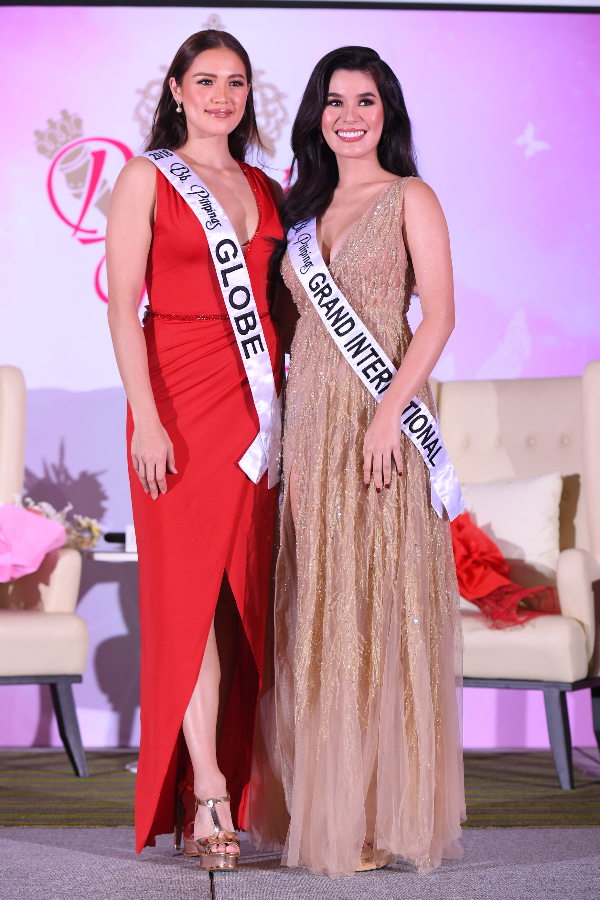 The two beauty queens, who have been training intently for their competitions, were the women of the hour in the exclusive send-off party organized by the Binibining Pilipinas Charities Inc. on Wednesday, September 19, at the Novotel Manila Araneta Center.

Gumabao, one of the Philippines’ fiercest volleyball players, will be the first to compete in the Miss Globe final on October 21 in Tirana, Albania. Coming from a showbiz clan, Gumabao is also a budding businesswoman and social media influencer. She hopes to duplicate the feat of Ann Colis who won the title in 2015. Last year’s Philippine bet, Nelda Ibe, came close to doing that when she emerged first runner-up in the competition.

A firm believer of grassroots programs in sports, she founded the Michele Gumabao Volleyball Camp in 2012, where she trains 80 to 100 aspiring volleyball athletes from all over the Philippines annually.

Filipinos all over the world can also throw their support behind Gumabao by voting in the pageant’s poll. To vote for Gumabao, go to http://themissglobe.com/participants2018. Patalinjug, on the other hand, will try to win the country’s first ever Miss Grand International crown when she flies to Myanmar next month. The coronation night is set for October 25 in Yangon. She hopes to follow up on the success of the Philippines’ last two representatives Nicole Cordoves and Elizabeth Clenci, who were named first runner-up and second runner-up, respectively, in the beauty tilt.

Aside from being a registered nurse, Patalinjug is also an aspiring lawyer who dreams of becoming Philippine president some day. She has recently been named as Philippine peace ambassadress by the Office of the Presidential Adviser on the Peace Process.

“As a national peace ambassador, it is my duty to inspire people to take part in making a difference in this world, to influence them to put in their hearts and mind that accepting each other’s difference is important for us to attain peace and unity,” said Patalinjug, who also actively supports a non-government organization that helps women and children who are victims of domestic violence and rape.