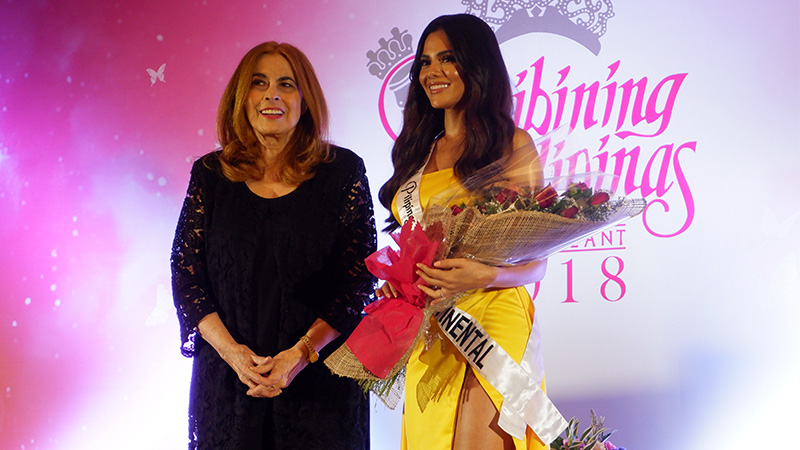 Filipino-Australian Karen Gallman said she is eager to keep the ball rolling for Filipina beauty queens and shine the spotlight on the Philippines, where the Miss Intercontinental pageant will be held later this month.

Gallman, the last to compete among last year’s batch of Binibining Pilipinas queens, was given an exclusive send-off party by the Binibining Pilipinas Charities Inc. at the Novotel Manila Araneta Center last Thursday, January 3, just before delegates from other nations start arriving on January 8.

“I guess in a way it’s also an advantage that it’s being held here in the Philippines because I will have my supporters supporting me on pageant night, so I am very excited for that. At the same time I prepared so hard, it’s been very challenging and been very busy for me especially these holidays. I am going into the competition really prepared for anything,” Gallman said during her send-off party, which was attended by BPCI chairperson Mrs. Stella Marquez Araneta, Binibining Pilipinas Globe Michele Gumabao, Binibining Pilipinas Grand International Eva Patalinjug, second runner-up Samantha Bernardo and members of the media.

She also acknowledged the pressure of trying to win the crown, which has so far eluded the Philippines in the pageant’s 47-year history.

“There is pressure on me to be the first Filipina (to win the Miss Intercontinental crown). But to me, it doesn’t make sense to put pressure on myself more. I really just wanna have a relaxed mindset and just be present as much as possible. But at the same time, I’ve prepared so hard for this competition,” Gallman said.

To finally secure the win for the Philippines, Gallman said she has been working on her walk, eating healthy and practicing for the question and answer. She has also enlisted Patrick Star to work on her national costume and Benj Leguiab IV and Patricia Santos to design her evening gowns.

She is also using her time for various worthy causes. The 26-year-old former London-based trade analyst was appointed by the Office of the Presidential Adviser on the Peace Process last September as one of the country’s peace ambassadors. She said she considers peace, education and children’s welfare as the causes she’s most passionate about.

“She is an inspiration to us all. She has set a platform for all of us girls to now aim for which makes us push harder,” Gallman said.

Japan is actually serving as the host nation of the pageant, but because of logistical concerns brought by its hosting of the Olympics in 2020, it has decided to hold the contest in the Philippines instead. The coronation night is slated on January 26.