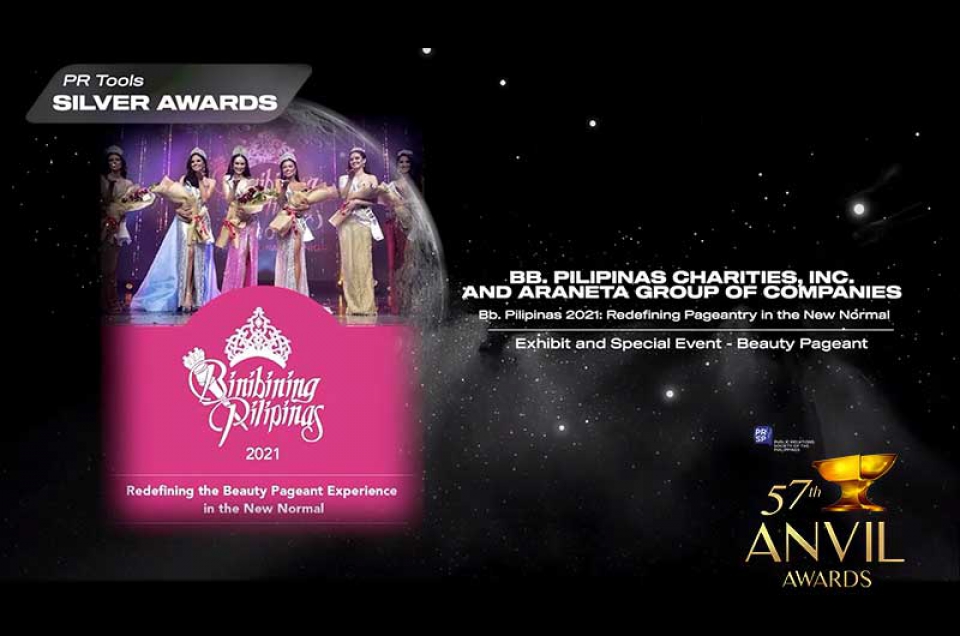 In the 57th Anvil Awards ceremony held virtually on February 24, the 2021 Binibining Pilipinas beauty pageant was announced as a Silver Anvil awardee under the category "PR Tools - Exhibit and Special Event-Beauty Pageant". It is among the 99 entries shortlisted out of the total 540 public relations (PR) programs submitted.

The award-giving body recognizes the innovations introduced by the Araneta Group and BPCI to the country's most prestigious beauty pageant during the pandemic. Modern technology was utilized for creative executions such as the national costume augmented reality, multimedia advocacy promotions, mobile app voting, virtual pre-pageant presentations, and the grand coronation night which was broadcast live for the first time across multiple platforms.

All these initiatives brought Binibining Pilipinas closer to fans and supporters despite the limitations and restrictions due to the health crisis. "With the shift to digital, Bb. Pilipinas attracted an even larger fanbase, as evidenced by the growth of its social media reach, engagement, and impressions. Views of all Bb. Pilipinas activities reached a cumulative total of 1.03 million. The Grand Coronation Night alone logged 2.3 million views and earned 4.5 million total impressions. It also proved to be one of the biggest events of the year, dominating headlines and earning media values worth more than ₱45.8 Million," said in the official entry submitted by Araneta Group and BPCI.

Presented by the Public Relations Society of the Philippines (PRSP), the Anvil Awards are annually given to outstanding PR programs in the Philippines.

"We are glad that our fresh and modern take on Binibining Pilipinas was adjudged as among the most exemplary initiatives for PR events. This recognition motivates us to make the country's premier and most anticipated beauty event more exciting in the coming years," Irene Jose, BPCI Executive Committee member, said.

BPCI has officially opened its search for the 2022 pageant. Aspiring Binibinis have until April 8 to send their application to [email protected] or to the BPCI Secretariat at the South Gate entrance of Smart Araneta Coliseum. Forms are available for download here.

The search is on for Binibining Pilipinas 2022