Pia and Maxine UNICEF allies in fight against HIV & AIDS 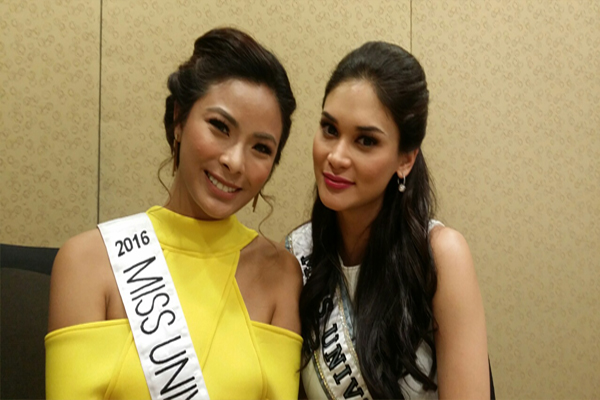 Miss Universe Pia Wurtzbach had a meaningful 27th birthday celebration here in the country by spending it with a number of young people involved in the HIV response. Binibining Pilipinas, through its partnership with UNICEF, took Pia and Miss Universe Philippines 2016 Maxine Medina, her Binibining Pilipinas successor, to the UNICEF Philippines office and spent time exchanging stories and giving them encouragement.
Pia shared her experiences as Miss Universe in New York, while the young peoplerecounted their difficulties in learning how to protect themselves and what sexual health and reproductive rights they are entitled to.
UNICEF officials led by UNICEF Philippines Representative Ms. Lotta Sylwander said that the UN children’s agency is supporting young people by creating safe spaces where they feel empowered, strengthening delivery of adolescent-friendly health services, and helping improve the enabling environment by advocating for laws and policies to protect them.
Since her Binibining Pilipinas days, Pia’s advocacy has always been about spreading HIV &AIDS awareness. Now that she wears the Miss Universe crown, her voice has been louder; her platform bigger. And she walks the talk, too. Pia had herself tested recently and admitted to her birthday guests that she felt nervous doing so.
Maxine, for her part, said she truly began being more proactive about HIV &AIDS awareness when she learned more about it from colleagues in the industry. Since then, she’s encouraged people she knows to get tested and, aligning her efforts now with Pia and UNICEF, has taken on the role as their ally in the fight against it.
On a lighter note, the adolescents they visited gave Pia a gift in return – a cake for the queen’s birthday. Maxine, on the other hand, led them in singing the birthday song. It was a quiet celebration for the most beautiful woman in the world, but for Pia – and surely for Maxine, too – its significance is tenfold.
For more News on Binibining Pilipinas visit www.bbpilipinas.com and the BinibiningPilipinas official Facebook page https://www.facebook.com/realbbpilipinas and follow @bbpilipinasofficialon Instagram.

Binibining Pilipinas 2020 candidates to be trained by Catriona Gray